Home » trail » In search of the villages buried by volcanoes

The volcanic eruptions that Lanzarote suffered in the 18th century destroyed 21 settlements, with the passage of the lava forming a new landscape

“The volcano changed the history of Lanzarote” are the words of the historian and archaeologist José de León, after presenting his doctoral thesis on the villages that were buried by the volcanic eruptions of the 18th century. The end result was that nine large villages were buried under the lava: Tingafa, Montaña Blanca, Maretas, Santa Catalina, Jaretas, San Juan, Peña de Plomos, Testeina and Rodeos.

Their remains are still to be found under those dark, jagged rocks that dominate the terrain of the Timanfaya National Park and its surroundings. It’s thanks to the research carried out by archaeologists and historians that today we know where the island’s population centres were located at that time.

The Caldera de Los Cuervos was the first volcano to form in this process of massive and continuous eruption. Today it can be visited on a pleasant hike along gentle trails that nevertheless reveal the magnitude of the disaster that occurred in the 18th century. It so happens that, not many metres away, you can see the last of the volcanoes that appeared at that time, Montaña Colorada.

To get to the Caldera de los Cuervos, take the Casa-Museo del Campesino as a reference point and head towards the village of Masdache. Once past the village, turn right at the next intersection and after about 300 metres you will see the caldera and a large car park on the left.

The ash, lava, or both, buried 21 settlements, from villages to hamlets or pagos consisting of just three or four houses. The largest was Tingafa, but El Chupadero and Santa Catalina are also under the Chimanfaya volcano, which was the first to appear, with some 1500 inhabitants losing their homes completely. To find the current location of the Montaña de Tingafa, leave Mancha Blanca in the direction of Timanfaya, which is 3.7 kilometres away.

If you are coming up from Yaiza, the place to park is 1.7 kilometres from the entrance to Timanfaya National Park, right next to Montaña de Tingafa, exactly at the point where there is a sign showing the imposing Diablo de Timanfaya. At this point there is a small car park which must be entered carefully due to the difference in level between the road and the area where you can park. 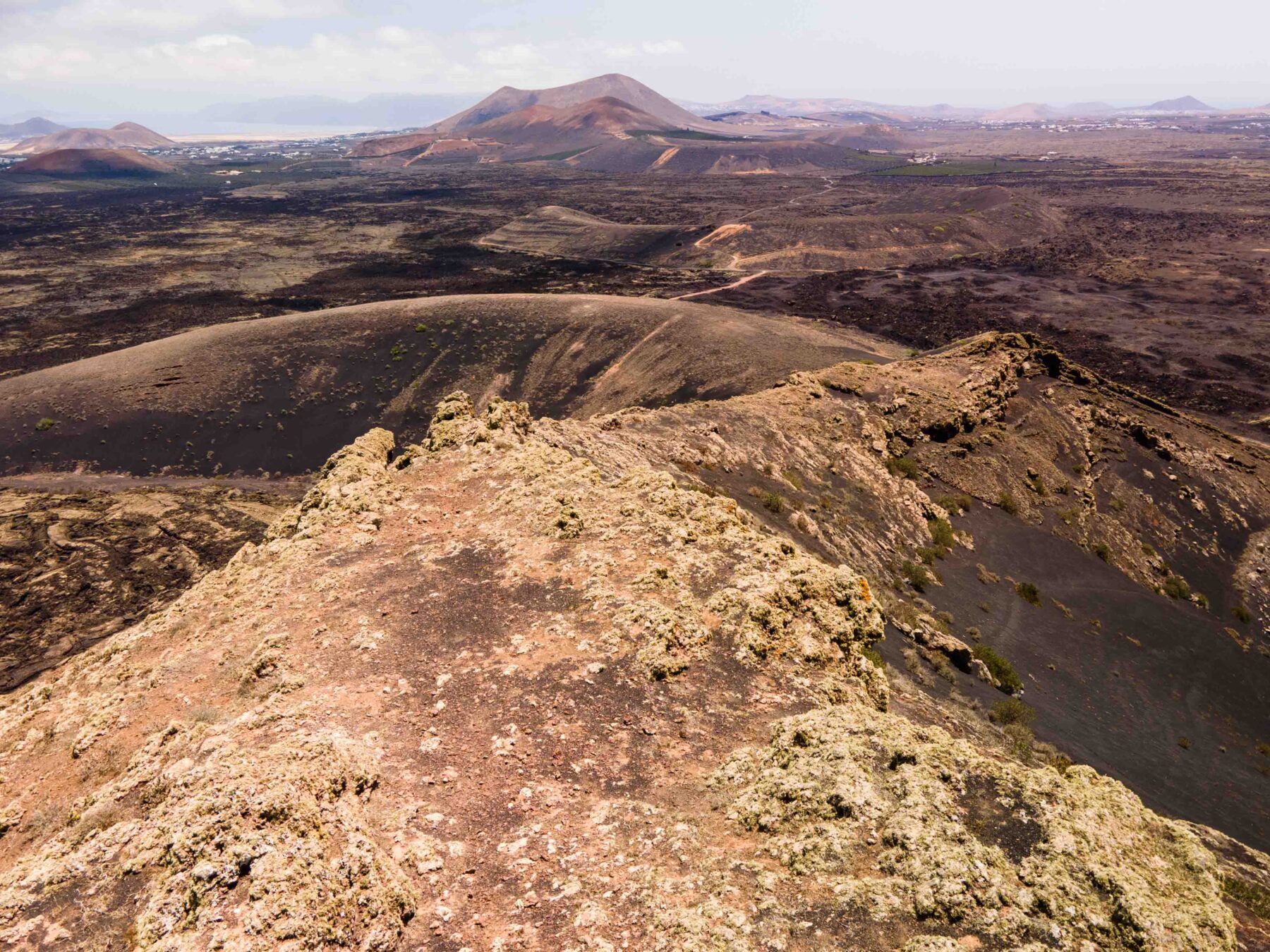 Another highlight in the island’s volcanic history is the summit of the Montaña Ortiz from where you can receive a practical lesson on what Lanzarote was like before the historic eruptions of the 18th century. Turning north you would have been able to see the village of Mancha Blanca in its former location, and beyond that the Cortijo de Iniguadén. This landscape, and the view, was crossed by an enormous ravine that ran as far as Mozaga before splitting into two: one ravine of sand and another of jable (the local word for sand of marine origin blown in on the wind).

And if you had made a 360-degree turn, you would have seen Pago de Candelaria, and the villages of Masintafe and Testeina, where a taro, or area enclosed in the lava, can still be seen, as well as the walls of a house in the place where Domingo Hernández Fajardo, Clavijo y Fajardo’s grandfather, had his home.

To find Montaña Ortiz today, head south from the Tinguatón crossroads and you will come across a fairly large parking area on the right. Opposite, on the left-hand side of the road, just in front of the car park, you can clearly see the entire route, framed by a dirt track in the middle of the majestic lava formations of this protected area.

What are now the Montañas del Fuego were once plains where cereals were grown. There were fertile meadows where “more cows than camels” grazed, areas where tabaibas and verodes grew, as well as shearwaters Egyptian vultures, ospreys, bustards and some 5,000 inhabitants, half of whom left despite the fact that in the early years the authorities forbade them to do so. Volcanic activity was not continuous, but it was insistent.

On the hiking routes organised by Senderismo Lanzarote, every detail of each point of the island is interpreted so hikers understand the landscape before the arrival of the eruptions that began in 1730 and ended six years later. Getting to know the geological past of the island and how the lava eruptions affected it is another attraction for the thousands of hikers who visit Lanzarote every year.